How and why did you first get involved in the Singing Group?
One of the first Sundays I attended the church, I was seated just behind Mike’s wife who, as wife of the choirmaster, was constantly on the lookout for potential new singers. She told me about [the Singing Group] and I decided to go along because it was cheaper than any of the various choirs that the uni had. So, yeah, I thought I might as well.

And were the current members welcoming?
Yeah. Most of them seemed fairly elated to have an under-thirty member of the Singing Group – two at once, because William joined the same time as I did. Up until that point they hadn’t had anyone that young show an interest in quite some time.

How do you find being the only current male member, besides Mike?
It’s fine. I suppose it means it's slightly more difficult. If there are two male parts to what we’re singing then I have to do one on my own which is slightly more difficult than doing one with someone else whom you can kind of match your voice to. But for the most part it doesn’t seem to be a problem.

Could you describe a typical Singing Group rehearsal?
We turn up and the first hour or half hour, after everyone’s arrived, will be spent practising the actual songs for the next performance. After that, Mike makes some sort of choirmaster-y judgement on which ones will need most practice and then he makes the decisions as to which ones we do and for how long we practise each one each session. Usually this takes, in total an hour and a half, maybe? Something like that.

What do you think of the song choice? Do you enjoy the things you sing?
Yeah. Probably most of them – at least, most of the ones we’ve done in the time I’ve been a member – are the kind of old-school, moody and sanky-type church organ music – which always has particularly nice harmonies, so it’s always something I’ve enjoyed singing anyway. And those are interspersed with the occasional more modernised, upbeat piece so it’s quite a nice kind of variation and it’s all types of music that I enjoy anyway.

You occasionally play the trumpet with the Singing Group, how did that come about?
I cannot remember what the first piece was – it may quite possibly have been Stand Up, Stand Up for Jesus – they had a fanfare arrangement of the hymn. I think I had told Mike previously in a general conversation about music that I had a Grade 7 in trumpet. And so, because it was a fanfare arrangement of the piece that he had, he clearly remembered that I was a trumpeter and therefore asked if I would bring my trumpet to the rehearsal and see what it sounded like with the actual trumpet fanfare alongside the singing. And when we tried that it went down pretty well so every so often, if there’s another trumpet-suitable song, Mike will make the same request.

As well as music, the Singing Group is also very social. Do you find that’s beneficial?
Certainly, yes. I think that any group activity that requires regular meeting tends to form social bonds just as a side-effect of the process, whether intentional or not. So, while admittedly I can still only get the names right first time of less than fifty percent of the choir, I certainly know most of them much better than I would have if I were just a congregation member without also being part of the Singing Group. And I think it also makes me more recognisable to everyone else in the congregation in that I can be sort of mentally filed as that guy that’s the kid in the Singing Group. So I tend to get drawn into more social conversations in general because people have recognised me from that.

And is that a good thing?
Yes, I suppose so. Talking to people is always fun – well, I guess it depends on the people, in fairness. But I’ve never actually encountered somebody through the Singing Group who was actually unpleasant to interact with.

Currently the Singing Group is in danger of being put on hold because of low numbers. How do you feel about that?
It’s a bit of a shame. It was the only official regular musical outlet I had, so that’s a bit of a shame. And it’s a little sad in a more general sense, just as it would be with any tradition that the church may have had that was enjoyable, losing that can be a bit of a disappointment. But, you know, there’s little that can be done. If the resources or manpower are just not there, then that’s something that has to be accepted. These things happen, particularly with church choirs and stuff, where the people attending the church come and go and the numbers fluctuate naturally. So I can’t honestly say that I wasn’t at least in some measure prepared that it might happen at some point. 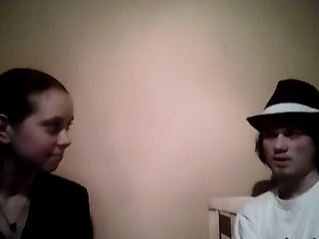 I was able to get a picture of this interview, which was recorded using my computer's video function, rather than a Dictaphone.