I'll admit it: I had no idea how to write an Ethnomusicology report before I started this one. In class we had talked about the sorts of music that Ethnomusicologists study:
From this starting point, I considered music in my own life. I was part of several university music ensembles - playing flute in the Concert Band and accompanying the Rock Gospel Choir on piano - and I was also a member of the Singing Group at St Mary's church.

I eventually decided to write about St Mary's Singing Group for three reasons:

This wasn't a complete shock. There had been prior talk of having to stop the Singing Group temporarily, but it wasn't until now that actions were actually being taken to pull back.

First the rehearsals stopped. The Singing Group continued to sing at the Sunday service, but only the anthem. The introit had been cut. And, eventually, the Group stopped singing completely.

I decided to continue to do my report on the Singing Group anyway. I would talk to the people I interviewed about their response to the news and explore what effect the closing of social music groups like this has on the people involved. 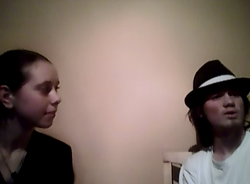 I learnt that, founded in 2004, the Singing Group was always designed to be an informal gathering, open to anyone in the church who wanted to sing, regardless of vocal talent. The music, chosen by Mike Hay purely based on the types of music he enjoys, varies from "moody and sanky" to "modernised and upbeat". As the Singing Group developed, it became more adventurous, singing in more parts and occasionally introducing instruments other than the organ accompaniment.
The congregation really enjoys the music and the Singing Group plays a large role in the church services, in particular at Christmas and Easter. Closing the Singing Group may be inevitable, but it will certainly take away from the Sunday services a musical experience that has been around for almost ten years.

Listening to the recordings.
The next stage was to gather recordings of the Singing Group.

As there were currently no Singing Group rehearsals, it was impossible to record the Singing Group myself. However, over the past two years, two CDs had been made which had a variety of Singing Group music on them.

The selection of songs shows the variety of ways in which the Singing Group has progressed over its lifetime. We can see from Christmas isn't Christmas and Highland Cathedral that often the Singing Group is split into two parts: males and females. Occasionally extra instruments are added, as in Mary's Boy Child and Calypso Carol. And sometimes things are made more complicated: adding soloists (In The Bleak Midwinter) or creating extra parts (Father We Adore You).

The final stage was, of course, just to get on and write the report.